Iodine Is the Thyroid Booster You’ve Been Waiting For

Imagine a nutrient that is crucial in thyroid health, autoimmune prevention and fetal development.

Imagine that it is needed by everyone in small amounts but has a history of deficiency here in the U.S.

Sounds like a powerhouse but one you may not have learned much about before now.

Iodine is a trace mineral, meaning we only require very small amounts but we still absolutely need it to survive. We first figured this out in the early 1800s thanks to a French chemist.

But despite how long we’ve known about iodine, there is so much we still don’t know.

Iodine is not as studied or therefore understood as many of its trace mineral friends, such as magnesium or calcium.

But that doesn’t mean it’s not important.

As a matter of fact, if you value thyroid health or have a compromised thyroid, it may be the most important mineral for you to know about.

Because of iodine’s strong link with the thyroid, those with Hashimoto’s Disease, like myself, are all the more motivated to understand its role and value.

This mineral’s place in human health was known long before it was really understood or even named. In ancient China, doctors recommended consuming sea vegetables as a way to prevent a swelling of the neck.

Toward the end of the 19th century, goiters were becoming an increasing problem, especially in the Midwest, so iodine was added to salt as a way to prevent deficiencies.

They were far from knowing why this mineral helped or even what was causing the growth, but they were ultimately prescribing iodine for goiters so long ago. 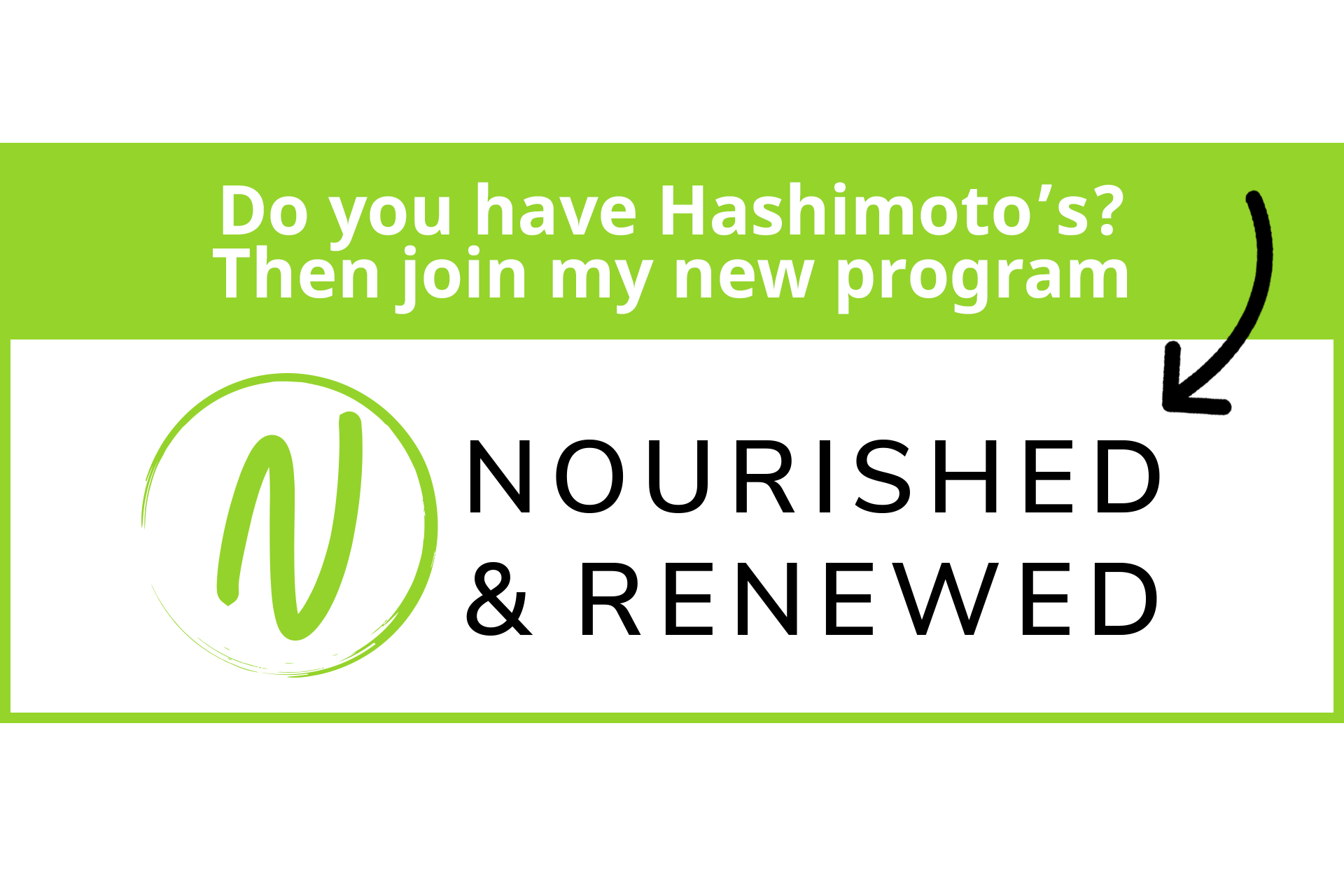 Iodine’s biggest role is as the backbone for thyroid hormones. This means that it plays a part in metabolism, temperature regulation, bone growth and more.

To utilize the iodine, the thyroid oxidizes it to make triiodothyronine (T3) and thyroxine (T4). In scientific terms, oxidizine means electrons are removed. (In laymen’s terms, well, it’s hard to simplify but just know that it changes states to have a new role, in this case as a hormone.)

This means that without adequate amounts of iodine, the thyroid cannot properly function.

In fact, when levels get too low, the thyroid steps up its functioning, making it enlarged and leading to a goiter.

The most obvious sign of a deficiency is a goiter but that is a pretty extreme sign. There are more subtle signs that come up before it gets that far. These include:

Because of the importance of T4 in fetal development, the most alarming result of extreme iodine deficiency is stunted growth of the fetus.

Pregnant women with this deficiency have an increased risk of giving birth to babies with mental impairment, hypothyroidism, deafness and smaller size.

What Leads to Iodine Deficiency?

We may get answers about iodine deficiency from where we get our food and where we live.

As Americans, we have access to all kinds of foods from all over the world these days. But back in the day, much of what you ate probably came from a lot closer to where you lived.

This meant that if you didn’t live near a coastline, you wouldn’t have regular access to seafood and other foods from the ocean. I’ll get into the actual sources of iodine in food later but for now, know that the sea gives us a lot of our iodine.

As fortifying foods and access to foods from all around the globe have increased, iodine deficiencies have decreased. But it is estimated that as much as a third of the population suffers from inadequate levels.

But there is an interesting darker side to processed foods that may actually be having a negative impact on your iodine levels. Wheat flour is often processed using a chemical called bromide, or potassium bromate.

You may have noticed flour labeled as “bromated.” This means it’s been treated with the chemical in order to bleach it and improve elasticity and rising in baked goods.

But in addition to being a carcinogen, it also blocks iodine activity. And although it has been banned in some countries, bromide is still legal and commonly used the the U.S.

Fluoride (and chlorine, which is found in our tap water), is among a class of chemicals known to block iodine usage.

How Do You Know If You’re Iodine Deficient?

Iodine is most often tested in the urine but can also be tested by testing the blood or doing an iodine skin patch.

When looking at urine samples, ideally iodine levels will be between 100-380 mcg/g Cr (creatinine). Less than 100 mcg/g Cr is considered deficient.

Pregnant women should have higher levels so anything below 150 mcg/g Cr and you’re looking at a deficiency.

In my practice, I use micronutrient testing for measuring vitamin and mineral deficiencies, but Spectracell does not include iodine as one of the measured nutrients.

For testing a client I suspect is iodine deficient, I suggest they order the True Health Labs Iodine Serum Test.

Apply 2% brown tincture of iodine to your skin (available at most drug stores) - the best locations are the underside of the wrist, the upper thigh or the lower abdomen.

If the brown stain fades in 24 hours or less, it indicates there is not sufficient iodine to normalize thyroid secretion to the cell. The rapidly fading stain indicates a deficiency of iodine.

Is It Possible To Get Too Much Iodine?

The sneaky part about this essential mineral is that, while you can get too little of it, you can also get too much. This is especially true if you suffer from an autoimmune disorder, but especially an autoimmunity like Hashimoto’s.

Even without autoimmune issues, you can get too much iodine. However, it would be very rare that this would happen from diet. Instead, it would occur after excessive supplementing, and usually if there is an underlying medical condition like kidney failure.

What IS the Right Amount of Iodine For Your Thyroid?

There are varying factors to consider when calculating the best amount of iodine, although, unlike with some nutrients, there are no variations for men and women. Newborns and infants need more than young children and pregnant and nursing women need the most.

Excessive amounts would be more than 1,100 mcg for most adults. Even in this range, a one-time intake should not be dangerous in the same way regular intake of that amount would be.

It would be very difficult to consume this amount through food.

Easily the most iodine-rich food on the planet is sea vegetables (what we usually think of as seaweed, although there are many kinds).

Sea vegetables, like nori, dulse, wakame, kelp and kombu, can contain 750 mcg in just one tablespoon. (And they are delicious added to soups!)

Although no other foods contain quite as much as sea vegetables, other iodine-rich foods include:

Looking at this list, you might make the connection that vegans (and even vegetarians) can easily become iodine deficient if they don’t go out of their way to include sea vegetables in their diet.

The Pros and Cons of Iodine Supplementation

As I always try to encourage my clients, supplementing should not be chosen instead of dietary changes.

It is not the quick, easy or long-term solution but an iodine supplement can help in the short-term.

For the long term, dietary changes can slowly being incorporated to give relief or just taking a therapeutic dose of iodine to get you started in the right direction.

In the case of iodine, supplementation is often not necessary, and as you’ve learned, may even be dangerous. But in some cases, iodine supplements can help prevent serious health problems.

Iodine supplements come in capsules or liquid but that is really just a personal choice. And as with all supplements, be careful of added fillers or allergens.

If you value your thyroid health or have been looking for a way to boost it, iodine is a small but easy way to support this crucial gland. And that is even more true with Hashimoto’s Disease.

And, if you’ve been taking notes (ha ha!), you can see the benefits and safety of making sea vegetables a regular part of your diet.

Sea vegetables are healthy, tasty and easy to incorporate into soups and other foods. (Sea vegetables: not just for sushi anymore!)

If you need a recipe to get you started, check out my Miso-Wakame Soup (which I also recommend as part of a healthy family diet during the cold and flu season.)

And, finally for more support with your thyroid health and overall wellbeing and nutrition, check out my Nourished & Renewed With Hashimoto’s program. This is a 30-day online lifestyle program geared to helping you feel your very best with Hashimoto's.

If you have tried lots of things to improve your thyroid health but are still struggling to get things moving in the right direction, consider my Happy & Healthy Adult Program which is a more personalized approach. One-on-one nutritional counseling is often the right fit for people with Hashimoto’s or complex health situations. 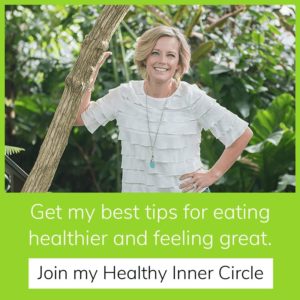 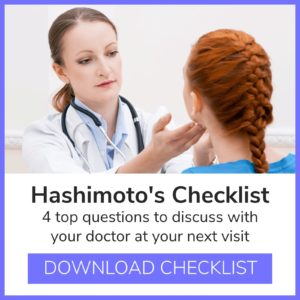 Connect with me on social media

The information on this website is for educational purposes only and should not be considered medical advice. This information is provided to help you make informed decisions about your health. It is not meant to replace the advice of your primary physician.

Choosing a holistic approach to health care through nutrition means choosing personal responsibility for your health care. Sara Peternell, MNT, is not liable or responsible for any harm, damage or illness arising from the use of the information contained herein or through any of the nutritional therapy programs available for purchase.

By reading the information on this website, and by becoming a client, you agree to defend, indemnify and hold harmless Sara Peternell, MNT, and all agents, from and against any and all claims, liabilities, damages, losses or expenses, including reasonable attorneys’ fees and costs, arising out of or in any way connected with your access to or use of the website, products or services.